Even when you have the makings of a great product with a compelling story behind it, achieving your first big break isn’t easy.  Far from it.

Chris Gillan had served three military tours, he’d been to places and seen things you and I are spared from.  But despite the war zones he had survived, his belief in people and their humanity was undiminished.  At the end of his final tour Chris took a different direction and launched ‘Heroes’ premium –  a seven time filtered vodka. 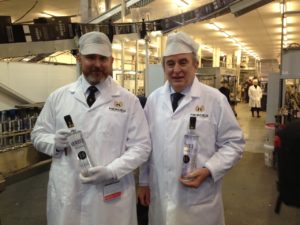 Chris Gillan with Brendan at the first bottling run of Heroes for ASDA at Broxburn Bottlers in December 2016.

Chris gathered a team behind him – but struggled to make any headway against the giants of the vodka industry.  Heroes sales were pretty much non-existent.

Chris, founder and MD of Heroes says “With a background in the military we had a very distinct skillset but we didn’t know how to sell.  I had a vision to make Heroes the upscale vodka brand of choice, but frankly, we were floundering.”

Heroes is also a registered community interest company, and as well as donating a percentage of profits they aim to employ military veterans who, for whatever reason, are struggling with ‘civilian’ life. But without sales, Chris had few employment opportunities to offer.

At this point Chris met Brendan of Hawthorn Business Group at a sales presentation.

Chris told Brendan that Heroes had been let down on a number of occasions, including by a sales agency hired specifically to introduce Chris to prospective wholesalers and retailers.

Chris reveals “The agency we engaged with told us during regular meetings they had been actively approaching the liquor wholesaling chains as well as the supermarket groups. As it turned out they had done very little and had probably put our business back by 18 months. After asking Brendan to accompany us to a meeting with the sales agency, their deception quickly became apparent during this meeting and we later fired them.”

In 2014 Chris hired Brendan to create and deliver a sales strategy and a programme of needs-based-selling.  Success didn’t happen overnight, it rarely does.  But it is about to happen because from January 2017 you’ll be able to find Heroes on the shelves of 353 ASDA stores throughout Great Britain and Northern Ireland.  This is a step change for Heroes in terms of their market penetration and reach.

Chris continues, “The needs-based selling approach espoused by Hawthorn helped us to get close to the key people in ASDA and understand what they were looking for from suppliers such as Heroes. We now understand that sales is all about building relationships rather than pushing your product, even though we’ve got a great product!”

With the opportunity to sell through ASDA stores Chris is now able to employ veterans in sales roles and as Heroes ‘Brand Ambassadors’.

Hawthorn also worked with Heroes to improve the basic sales skills of the veterans they employ because while their relationship with ASDA is a real coup, Chris also wants to drive sales through individual pubs, clubs etc. particularly those closely associated with the military. By doing this they are seeking to build maximum brand awareness and penetration.

Heroes is still very much at the start of its journey. But we believe that a sound approach to needs-based selling, and a systematic and disciplined approach to sales activity, has set the business up for success in the future, and we are confident that the great contract with ASDA will be just the start.

Contact Brendan now while it's on your mind
07766505619
Brendan Walsh
brendanwalsh@hawthornbusinessgroup.co.uk
@HawthornBG 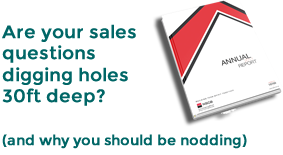